Putting this as a separate food review entry to my Day 5 in Japan.

Endo Sushi was one of the outlets that I have specifically set out to try, and came highly recommended by friends and bloggers online. As mentioned in my Day 5 entry, had wanted to go on Day 4 (Sunday) but googled and found out that they are closed on Sunday …… Thus pushed it to Day 5 (Monday) instead as my last activity in Osaka.

Not difficult to locate, based on instructions given by the train station master at JR Noda. About 10 min walk …… Got into the market itself and Endo Sushi is located in the row of restaurants at the other end of the market.

Very tourist friendly as they have English menus ……

Pretty empty as I reached after 9. I guess similar to Tsukiji Market, the peak breakfast crowd is around 7 to 8 plus in the morning. There are also a lot of celebrity endorsements on its walls as well.

Had a omakase set (otherwise known as chef’s choice, where the chef prepares according to the freshest and best ingredients of the day) costing 1050 JPY.

In the following order, from left to right – Hamachi (yellow tail), Toro (fatty bluefish tuna belly), Tai (sea bream snapper), Uni (sea urchin), Anago (eel). Can you spot the difference between the next series of shots and the earlier picture I posted? 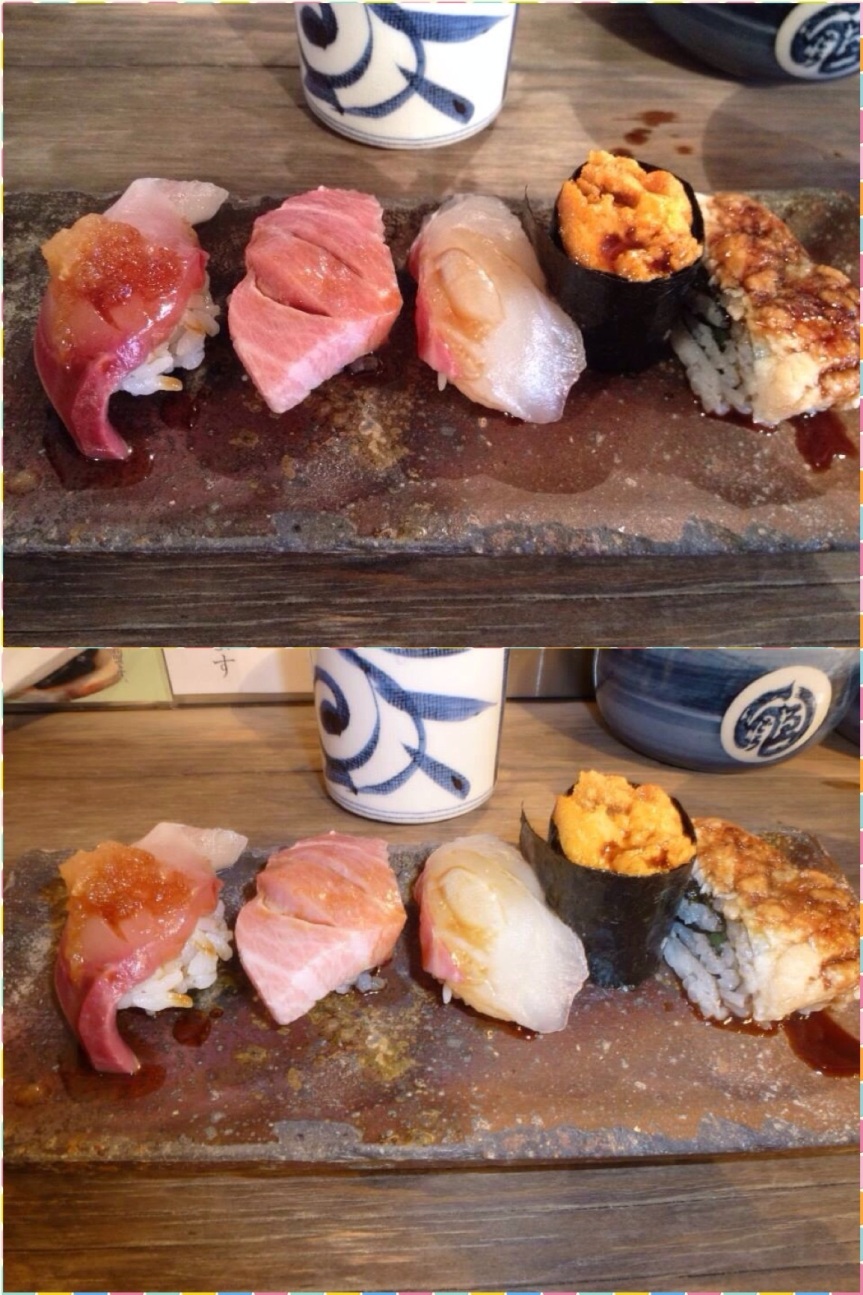 If your eyes are sharp, you should be able to spot a layer of soy sauce on the nigiri sushi itself. Typically we will dip the entire piece of sushi into a small plate of soy sauce (+ wasabi for some, but I don’t take wasabi) …… however when I asked for a sauce plate, the staff advised me to layer the soy sauce onto the sushi instead (using the brush provided)!

I guess this difference in eating style meant that flavouring from the soy sauce is kept at a minimum, and as a result, I was able to savour the ‘freshness’ of the fish so much more, heh. Similar to my sushi breakfast meal at Tsukiji for my Dec 2012 trip, the uni is always melt-in-the-mouth. Same with the Hamachi and Toro.

As for the top & bottom pictures, the bottom is basically using my digital camera, but with higher exposure. Thus the soy sauce coating is more visible 😛

1050 JPY for 5 pieces (works out to be 210 JPY per piece) seems cheap as compared to my meal at Sushi Daiwa (Tsukiji Market) where it was 3800 JPY for the omakase set (which works out to be 422 JPY Per Piece – set has 8 pieces of nigiri + 1 maki roll, counted as 1 piece) …… however for Endo Sushi, you have to top up an additional 300 JPY for the miso soup, while the miso soup is complimentary at Sushi Daiwa. Thus the average cost per piece works out to be around 270 JPY. Probably a difference of $1.93 in SGD terms (based on exchange rate of 1 JPY = SGD 0.0127). I guess it reflects Tsukiji’s reputation (more tourists) and Tokyo being a more expensive city as compared to Osaka.

Speaking of the miso soup, similar style to Sushi Daiwa, its clockful of clams. However from the orangy looks of the soup, it is heavier on flavouring. I definitely preferred the one at Sushi Daiwa, lesser flavouring which gave it a more ‘in the sea’ kind of taste that I liked. 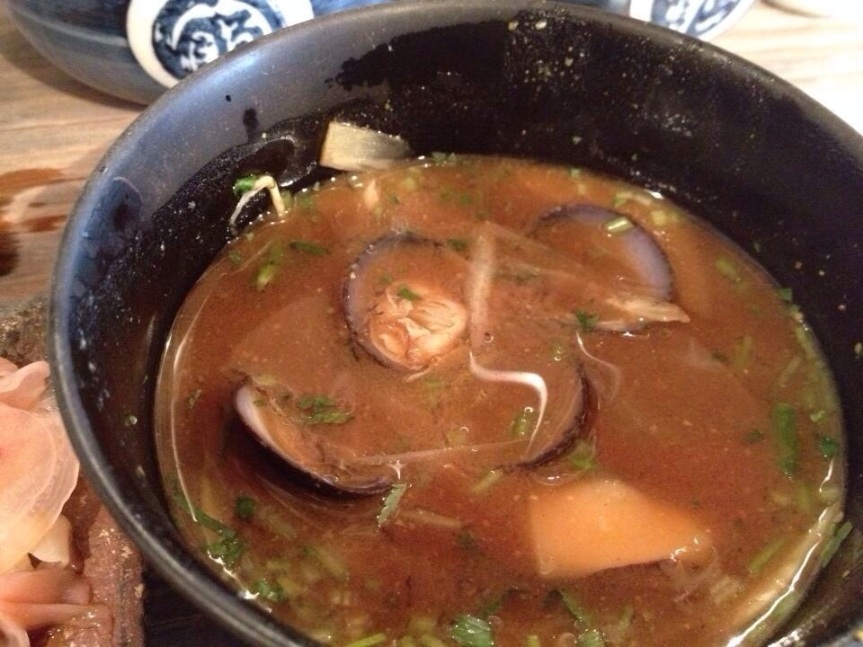 All in all, it is comparable to having a western weekend brunch in Singapore which would cost around the same (1350 JPY = SGD 17.15, based on an exchange rate of 1 JPY = SGD 0.0127). And of course, fresh fish off Japan’s shores cannot be compared to Singapore’s sushi (in sushi tei, 1 piece of uni sushi is already SGD 4+) as it is way superior in quality and freshness …… Just for quality and freshness alone (irregardless of exchange rate), it is already a good bargain + having sushi in Japan itself is just a totally different experience!

Check out my tripadvisor review here as well ……